Enigma-X is a hobby project of mine.  The precision of intricate devices is fascinating, as is the story of Enigma.  Whilst there were definitely aspects of the Enigma’s design which provided attack vectors, the real cracking of Enigma was more due to the human factor: lazy or hasty operators, enemy acquisition of keys and devices, the fact that the rotor wirings were never significantly changed, and so on.

As a software developer, I wondered what it’d be like to design and build, from scratch, a new software based Enigma that wasn’t limited by the same physical constraints, hence Enigma-X (X for extendable).  It currently includes an rough implementation of the Enigma I, and an original variant of my own invention called Calculus.

I have been working on for a while, and stems primarily from my background as a software developer and interest in history.  It’s also important to note that I am not mathematically inclined, nor am I particularly knowledgeable in cryptography.

One way to understand Calculus is to compare it to Enigma I, specifically in terms of the logical design of the rotor components – excluding the Plugboard (Steckerbrett) which Enigma I also used.

For direct comparison, the example shown here uses three rotors, although practically you can use any number of rotors that your platform will support.

As Calculus is software the physical concepts of left and right don’t strictly apply, however conceptualizing it in this way may make it easier understand.

Comparison of Enigma I to Calculus:

I started trying to work this out myself, but I’m not a maths-wiz by any means.  The picture below gives you an idea of the factors involved, but in the end I asked the Crypto Stack Exchange community and got some really helpful input.  See: https://crypto.stackexchange.com/questions/50444/how-to-calculate-the-key-size-of-my-cryptographic-system

Note: the following content as per v1.1, which is sufficiently similar to v1.2, se the user guide for precise information.

This is the main Calculus screen where you can encipher and decipher text: 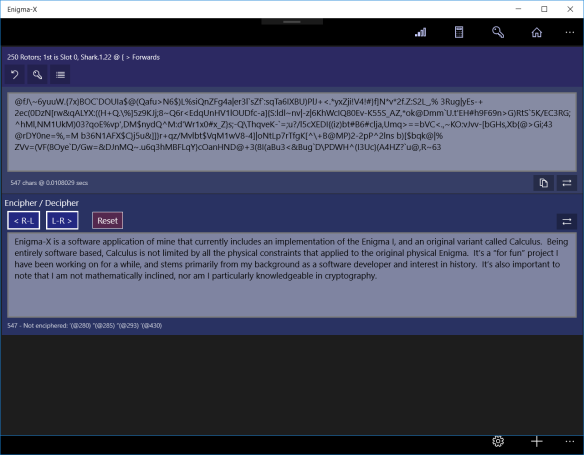 Coming up with an efficient way to set keys was an interesting challenge.

From a cryptographic perspective it’s critical to get this right – a lot of the things that lead to the original Enigma being cracked came from flaws and mistakes in the operation of Enigma – not just the cryptographic strength of the device itself.  But before we can get to this point I needed to come up with a practical way of just getting started – being able to create keys and key-parts.

Here’s the key creation screen, where you can define a key, including the five cryptographically relevant settings, which are:

Creating a key that uses 250 rotors (or more) is bit of a challenge.  I got around this (for now) by creating a simple algorithm that generates a sequence of random numbers – which a user can always modify.

The algorithm, RandomX, simply leverages the random number generation features of .Net, with some simple controls for limiting the number of items and max-value.

The keys need not be specifically tied to a specific rotor-set.  As rotor-sets will have different numbers of rotors, and potentially support different character-sets of different lengths, the algorithm need to consistently handle inputs that fall outside the range of the arrays – such as when wanting to select 100 consecutive rotors, from a 113-rotor rotor-set, starting at index 100.

Calculus gets around this by conceptualizing the array as circular – rather than as a line with two end points.  For example, assuming an array of 10 (and remembering that the valid indexes are therefore 0-9), a value of 10 would be index 0; a value of 33 would be index 4; and index of -3 would be index 7.  It can also safely handle variables bigger than the size of the array – e.g. a rotor selection increment of 197 against a rotor-set of 113 (giving us rotors 1, 85, 56, 27, 111, 82 and so on).  This means that Calculus can consistently handle configuration values against any conceivable rotor and rotor-set.

The RandomX algorithm is of course relatively simplistic and its predictability through regularity is no doubt a cryptographic weakness, but it’s an early example of the types of key generation approaches that Calculus could support.

At runtime, rotors are pulled from whatever rotor collection the operator has chosen – which currently would be one of the three 113-rotor rotor-sets, or some combination of the the 37 x 31-rotor rotor-sets in Shark.

Because Calculus is software based it’s also possible to implement controls that help mitigate some of the operator errors that led to Enigma being broken:

And for fun: taking every n-Letter (i.e. every second letter) so that you had two streams of text, reversing one, then recombining before encryption through the rotors – such a process would help hide cribs.

Singularity is a One-Time Tape implementation.

One of the cool features of Singularity is that you can use images to generate key-tapes: either by loading an image stored on your system or accessing one via URL.

One of the practical problems with OTT’s is how to securely share key-tapes, although the idea of accessing images from the internet will not be risk free, it does provide a potential way of sharing the largest critical part of the key – requiring a much smaller amount of information to be shared via other means.