Coming out of the ITEA conference, I referred to three magical signs that (IT) architecture is going through a positive transformation; #3 was around design thinking, a topic that a number of speakers covered in varying depth.  Amongst those was the heretic Blair Loveday; I mean sheesh, the guy’s a Chief Culture Officer, what blasphemy is this, him presenting at an architect conference?

Blair and the others spoke enough about design thinking to wet our appetites, but not nearly enough to constitute a meal; so, based on what I got from the conference and after some digging of my own, here’s my quick overview of design thinking – a sort of entrée to get you started.

I’m conscious that I’m partially trying to appeal to IT architects, let me do so by using the term ‘scientific method’, because it’s going to get a bit touchy-feely later on.

According to wikipedia, Design Thinking is comparable to the scientific method (feedback is obtained by collecting observational evidence and measurable facts) but with the addition of also considering the human aspect, or emotional state.  The inclusion of the human dimension is a key theme that you’ll find throughout design thinking literature.  For example, use of empathy is one of the specific techniques suggested for during the ‘learn from people’ phase.

One of the concepts Blair used to describe design thinking was a “the three “lenses” that you’ll see repeated in design thinking literature: desirability, feasibility and viability. 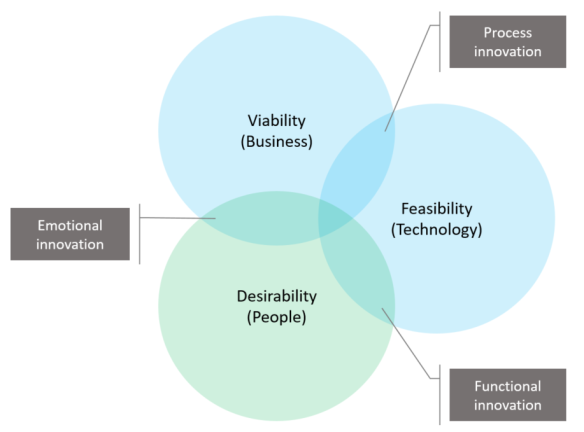 Blair respectively described these people, business and technology lenses, and then talked about then in the context of innovation – by type, depending on which lenses overlapped.  The central overlap of all three was “Experience Innovation”, which sounds fine but with all due respect is just a smidge too touchy-feely, even for me, on Monday – but that doesn’t matter.

Design thinking, according to Blair, is centered on the people / desirability lense – which is in keeping with Wikipedia’s view vis-à-vis the scientific method.  You’ll notice that this puts emphasis on emotional and functional innovation.

The thing I really like about this model is that it’s simple yet useful, calls out the human part (which is pretty essential) and provides one of several good anchors to understanding design thinking: making stuff that “is cool” or “just works”, for people.

Getting to Grips: Four Into One

Trying to understand design thinking by reading about it online is a little like talking to people who witnessed a traffic collision: everyone’s got a slightly different view.  Given how long design thinking has been around that’s probably not surprising.  I found a number of approaches.  What I’ve done below is to try and distil the main phases from the 4 interpretations that I studied:

The colour groupings are my own, looking for commonality across the different approaches, and are only indicative.  The four approaches are based on (from top to bottom): Design thinking example video (wikipedia), IDEO, Stanford University’s ‘Taking design thinking to schools initiative’ (wikipedia), and ‘A Framework for Design Thinking’ (Creativity at work).  Links to these references are below.

The third process, from Stanford, is the one Nick Malik referred to in his talk at ITEA 2017.

Chris Tuohy’s talk on experience’s at Westpac also touched on design thinking.  The Westpac approach has seven phases (not including an 8th step which seems to be a decision point at which the prototyped ideas are passed into a delivery-focused design and build lifecycle.  Unsurprisingly, these seven phases are all in common with those suggested by the 4 approaches above.

Distilled Comprehension: One from Four

Here’s my general take on what things a reasonable design thinking process should include:

Some of the descriptions include steps that come after what I would consider to be the core of design thinking (e.g. delivery).  I don’t think that’s necessarily bad.

You could say these were “steps”, implying a formal process; obviously you want to take time to understand before you race off and prototype stuff, but to put constraints that are too formal on the approach would do it a disservice.  For example, the phase of generating ideas and prototyping them could (and even should) be an iterative process.  After all: how many iterations = how long is a piece of string.

Finally, I got hold of Peter G. Rowe’s book “Design Thinking” from the Wellington public library; I haven’t made serious in-roads yet, but it looks interesting.  One of the things about it I am keen to explore the author’s views it given he’s coming from the perspective of a “real” architect (i.e. buildings, not IT).